The shape of the ear is determined by the underlying cartilage. In prominent ears (also called “Lop ears”), the cartilage is misshapened. The outer edge of the ear is called the helix. The fold inside that is called the antihelix (see Diagram 1). When ears are excessively prominent there typically is no antithetical fold and the helix protrudes far from the head. The objective of otoplasties therefore is to fold the ear back towards the head, creating an antithetical fold. The operation is done from an incision behind the ears so there are no visible scars. This is done by weakening the cartilage at a specific location with a special instrument and holding the cartilage in the correct position with permanent sutures. The results are ears which are markedly less prominent but which still look natural.

This operation can be performed on people of all ages. In youngsters we recommend deferring surgery until the age of seven because 90% of lifetime facial growth is completed by then.

At any age, correction of excessively prominent ears can provide a person with a great deal of self-confidence. It is a straightforward procedure with reproducibly gratifying results.

Preparation for the surgery is minimal and includes avoiding medication that can cause bleeding for two weeks prior to the surgery such as Aspirin, Advil and Motrin. The procedure is done as an outpatient under a light general anesthesia called LMA (Laryngeal Mask Anesthesia) and takes approximately one hour to complete. In children, the surgery is performed at the Hospital. In teenagers and adults it can be performed in our office facility. At its conclusion facial netting is placed to hold the ear dressings in place. These are removed at the first post-operative visit, two or three days after surgery, at which time patients may shower carefully. For the first ten nights after surgery a headband should be worn during sleep to prevent accidental disruption of the surgical repair. Otoplasties are not terribly painful operations but analgesics may be needed for a day or two. Rarely a revision of the repair of one ear or the other will be needed but in general the results of Otoplasties last a lifetime. 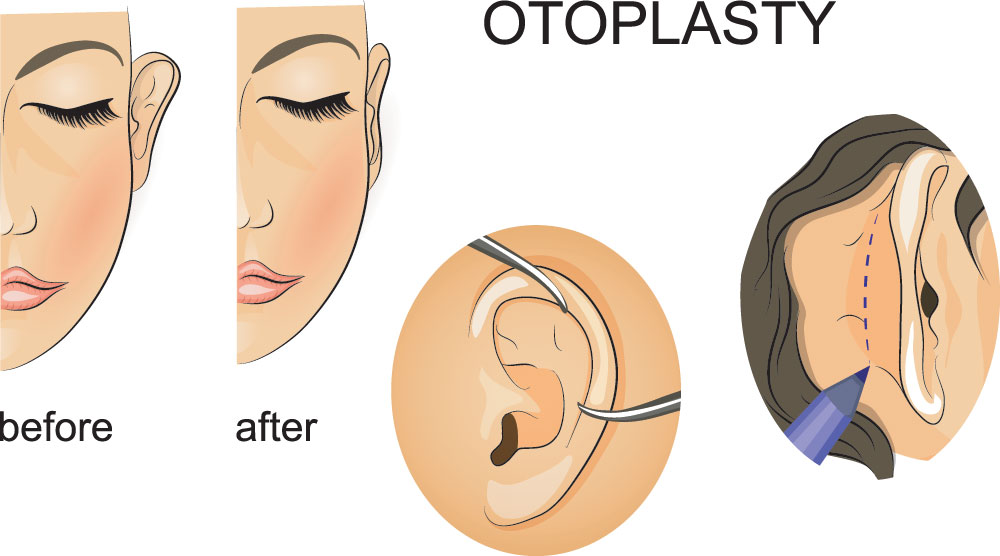