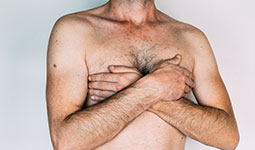 Every male has a small amount of normal breast tissue behind the nipple areola complex. A full two percent of the United States male population however, has an excessive amount which is called gynecomastia. This can be uncomfortable or embarrassing but is fully correctable.

During puberty, there is a surge of hormones in the male body, some of which cause the breast tissue to enlarge slightly. In the vast majority of young men the breast tissue prominence recedes by the age of 17 or 18 as the hormone levels dissipate. Therefore when teenagers present with gynecomastia it is important to allow several years for natural remission to occur before deciding whether surgery is needed. But as mentioned earlier, in two percent of young men the condition persists. This is called “physiologic gynecomastia” and is its most likely cause. Other known causes include medical conditions such as thyroid disease, pituitary disease leading to high prolactin levels, liver disease, or testicular disease. These are quite unusual but must be excluded. Drugs such as steroids and estrogens used for prostate tumors, or heavy marijuana use can also cause gynecomastia.

The surgical correction of gynecomastia requires a two prong approach including liposuction of the peripheral fatty component of the prominent breast along with open removal of the firm glandular component of the central part of the breast. (Diagram 1) This reproducibly and reliably leads to significant improvement in chest and breast contour with a natural appearance.

The severity of gynecomastia varies. There are many in whom it is so mild that no surgical intervention is needed. In others liposuction only of the breast and chest is indicated. In the majority of men with significant gynecomastia the two prong method noted above is needed. There are some instances, most notably in men who have lost a great deal of weight, when excess skin of the chest must be tapered as well. We have a great deal of experience of matching the correct procedures to the correct patient.

Preparation for surgery includes ruling out any of the known causes of the condition. Avoidance of medications that can cause bleeding such as Aspirin, Advil and Motrin for two weeks is also recommended prior to surgery.

The procedure is done as an outpatient, often in conjunction with other procedures such as liposuction of the trunk. It is performed under a light general anesthetic called LMA (laryngeal mask anesthesia). When performed separately, correction of gynecomastia typically takes slightly more than one hour. No drains are placed. The main incisions on the areola are closed with absorbable sutures, but often small additional incisions are needed to perform the liposuction and are closed with sutures that do have to be removed. At the conclusion of surgery, dressings are placed as is a compression garment. This is worn for one to two weeks after surgery. Patients return for the initial dressing change and suture removal three to five days after surgery. Showering may begin at that time. Most patients are able to return to work and exercise one week after surgery. Swelling will likely persist for several months. Finally, this is not a highly painful operation. Narcotics are often not needed for more than one day.