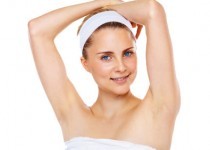 There are many people who are self conscious about the appearance of their upper arms. The complaint may be of thickness alone, of looseness of their skin, or both. When there is fatty tissue excess with good or even fair skin tone, we generally recommend liposuction alone because excellent results can be obtained with minimal scars. However, there are instances when the skin laxity of the upper arm must be addressed as well. In mild cases, a nonsurgical method may be indicated. This involves the use of Radiofrequency waves applied to the skin surface. It typically requires three or four treatments and preparation of the skin each time with numbing cream. Subtle improvement can be expected.

When a moderate or severe degree of skin laxity is present, an arm lift, called a brachioplasty must be considered. There are two versions. For severe skin laxity, which is often seen after weight loss, a full brachioplasty is needed. This involves the removal of along ellipse of skin a long the inner aspect of the arm, from the elbow to the axilla (armpit) which will tighten the skin maximally. The resultant scar is situated as close to the back of the arm as possible, and in the majority of cases heals very well. However, in approximately 10-20% of cases these scars can become thick or unsightly. For this reason we often offer a lesser form of a brachioplasty called a “modified brachiolasty”.

In this procedure a modest amount of skin is removed from the axilla. The arm skin is then elevated and anchored to the deep layer of tissue in the axilla. The scar is hidden in the roof of the armpit and reliably heals well. Modified brachioplasties are often performed in conjunction with liposuction of the arm.

In comparison with a full brachioplasty, a modified brachioplasty cannot be expected to tighten the arm skin to as definitive a degree. However, in the correct candidate excellent results can be achieved.

Preparation for any brachioplasty includes only the avoidance of medications such as Aspirin, Advil and Motrin for two weeks pre-operatively. These procedures are typically performed under general anesthesia and vary in length from one to two hours. Recovery can also vary from one to two weeks depending on the extent of surgery.